Little Jack Horner sat in a corner/Eating a Christmas pie/ He put in his thumb and pulled out a plum/ And said, “What a good boy am I.” 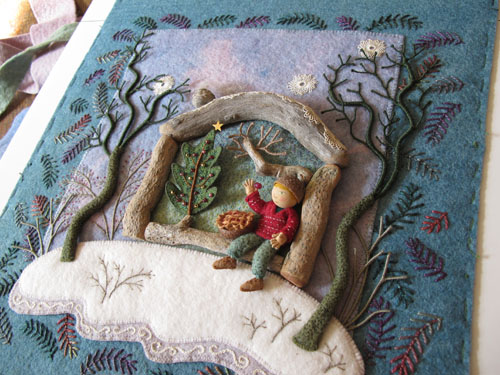 I made this illustration toward the end of the three-year Pocketful of Posies project. I was never happy with the original sketch and by the time I started working on it years later, had changed the design entirely. At first, Jack was sitting under a Christmas tree in an interior domestic scene. The next thing I knew, the wall had disappeared and Jack was half way inside and halfway out. He was still sitting with his pie, but he had let in the wintry outside. I never seem to be satisfied with a design, until nature bursts in.

After the artwork was photographed for the book, I stitched a felt border and framed the picture, which is now touring in the Pocketful of Posies Traveling Exhibit.

I like using variegated embroidery floss whenever possible. It adds a range of hues and a vibrancy that solid colored threads lack. 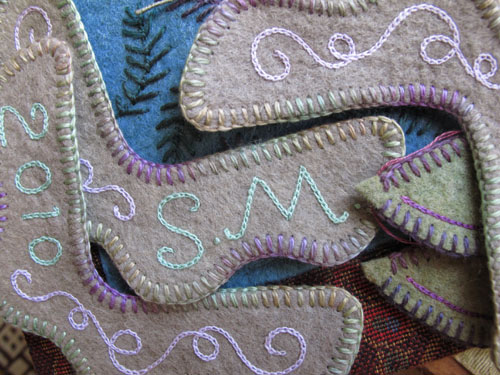 The snow on the roof top and in the sky is made from circular sections cut out of lace. Inside the driftwood house, the area behind Jack and the tree is textured with tiny stitches of different colored threads. 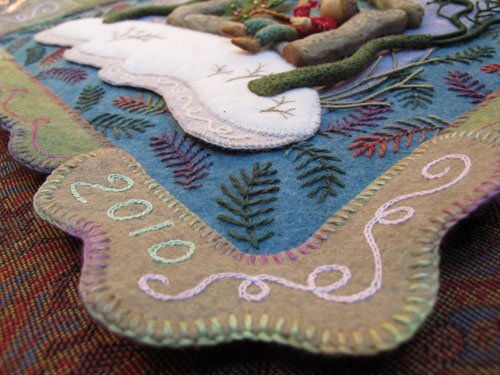