The one woman border stitching factory is running double shifts to get the illustrations finished and framed in time for my Pocketful of Posies traveling exhibit, which you can read about here.  This one is from the page for the rhyme “Ring around the rosie”. The border turned out to be much more involved than I planned and took several days to complete. From now on, I can’t afford to play around, trying out different approaches for each piece. It’s time to get serious. My goal is to complete one a day, so I’ll have all 51 ready by mid Sept., when we hang the show. 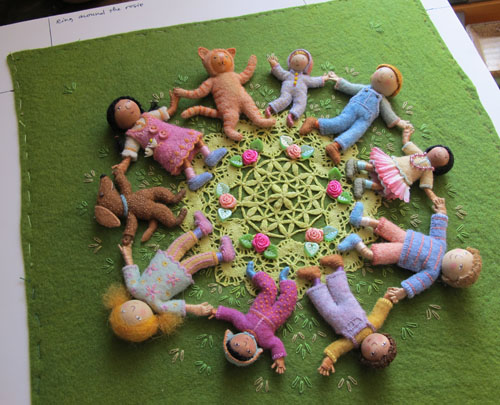 I picked out some upholstery fabric for the background and then chose the felt border colors.

I like to lay out different skeins of pima cotton from the Caron Collection next to the artwork and pick a color scheme that matches.

Then I edge the border pieces with a blanket stitch. 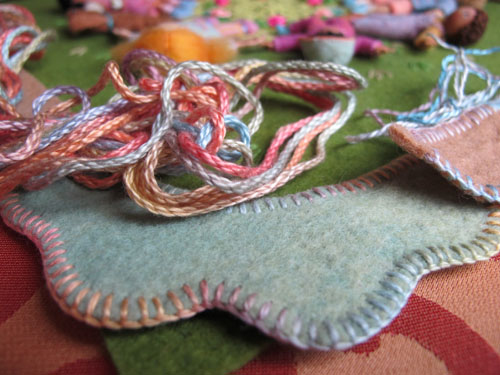 There’s a lot of open green space around the dancing figures in this illustration, so I thought that the border could take some embellishment. I did a little sketch of some leafy curled stems and embroidered them.

One thing led to the next and before I knew it, I was filling the leaves with orange floss and scattering french knots around like confetti.

When I put the finished border piece next to the artwork, it looked too busy and the many colors detracted from the circle of characters. It was clear to me that the first try didn’t look right and instead of wasting time trying to make it work, I quickly moved on. I put it aside and decided to make another design that was still embellished, but was limited to green chain stitching.

They were true doodles, done free hand, with every border section different. That way, I don’t have to plan it out and repeat exactly the same design for all 4 side pieces. Also, without a set pattern, the border more accurately reflects the lighthearted and uninhibited mood of the characters. 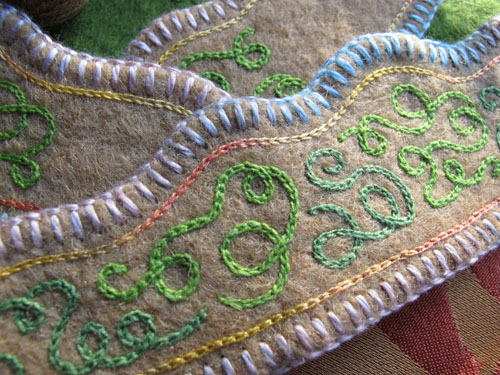 I then embroidered the date and my initials on the bottom corner pieces. 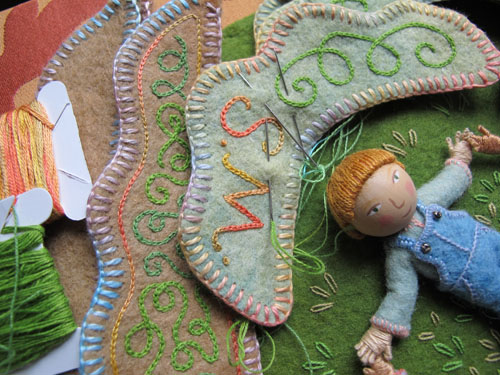 After sewing the side and corner pieces together to make a square border, I thought that it needed a little lift off the surface, so I added some wire around the outside edge.

Later, after I’d sewn the wire all around, I realized that I should cut and adjust the wire to conform to the curves of the corner pieces. 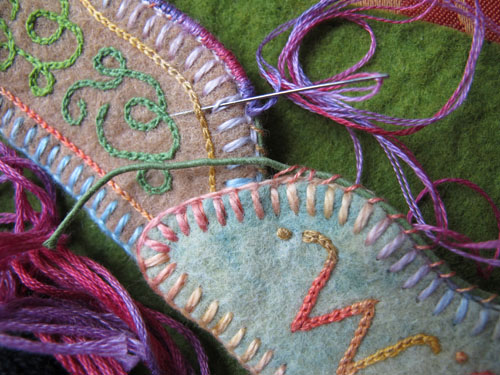 I then covered  the wire by wrapping it with variegated embroidery floss.

And to help define the form, I slipped some wire through the stitches on the backside of the inside edge, like a underwire bra.

Now, I sewed the whole wire supported border to the artwork and bent waves into the outside scalloped edge. 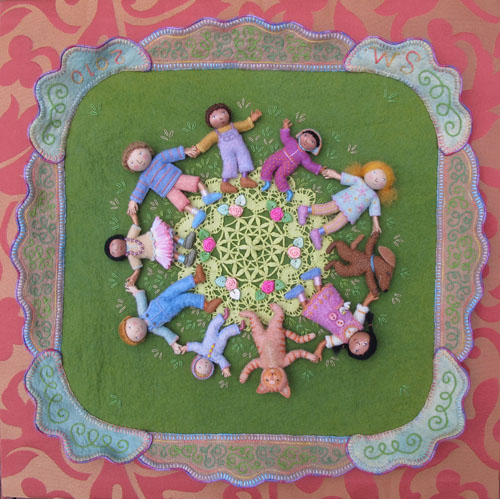 I’m half way through making the borders, with about 25 to go! I’ll try to remember to pause and take pictures as I go, but know some steps won’t be documented because I’m so intent on finishing this project.

16 thoughts on “Pocketful of Borders: Ring around the Rosie”