After working all winter long, I’ve finally finished Rabbitat! It’s large, compared to my book illustrations, measuring 24″ x 30″ , with a depth of 1 1/2″. I’m waiting for professional photographs of the finished piece, so for now I’ll just show pictures I’ve taken during the process. It’s got lots of parts, which I’ll be showing in several posts. This piece was unlike my book illustrations, which have to meet size and subject specifications and are planned out ahead. I let this project evolve by itself and just followed where it led.

To start, here are some drawings from my sketch book. My first ideas include a vine-covered house, which could be a topiary. A bunny showed up, too. 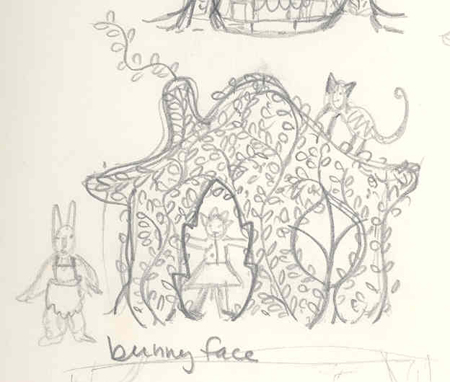 Then, the house became a structure made of driftwood pieces, with a rabbit topiary outside. I didn’t know who’d be living inside yet. 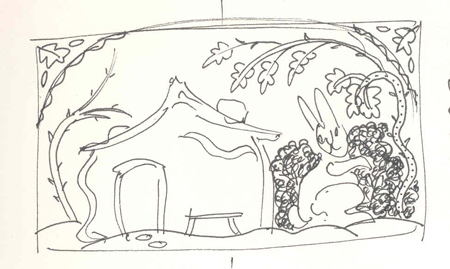 I combed through all of my driftwood and selected pieces which I could see as a roof and side beams and a doorway. 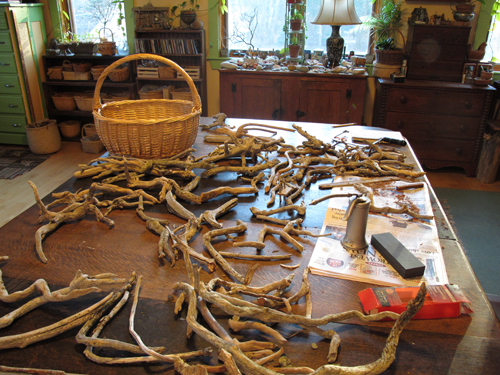 And carved them in spots, so that they fit together and lay down as flat as possible. I don’t know how the little chair appeared in this picture. Some of you may recognize it from another scene–the Driftwood Clan in my book, Felt Wee Folk. 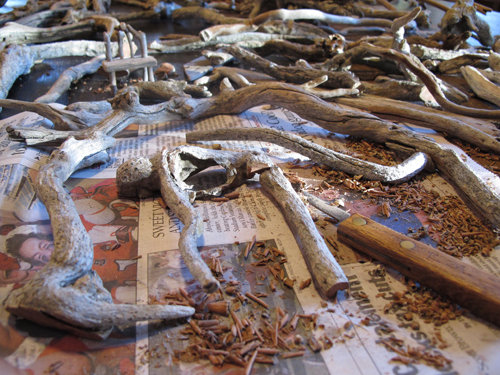 I drilled holes at the joints and glued wire pins into the holes. That way the parts are held together, but the wire joints keeps the structure flexible. I don’t know if this description is clear, but I essentially use wire in place of dowel pins because I don’t want the joints to break while I’m manipulating and working on the house. I’m always adjusting things until the last-minute, so the joints need to be somewhat bendable.

I decorated the house walls with an embroidered chain-stitched vine pattern on felt. The green mossy patches have lots and lots of french knots. 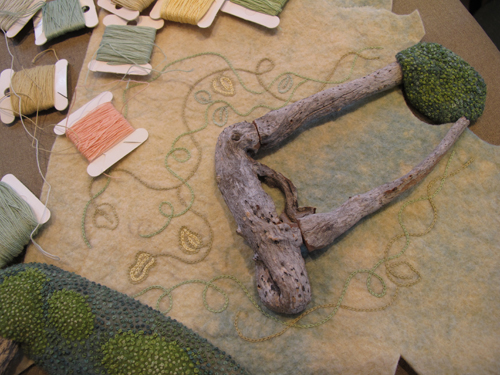 At this point, I’d decided that rabbits live in the house, so I made a father and son to sit on the bench outside. 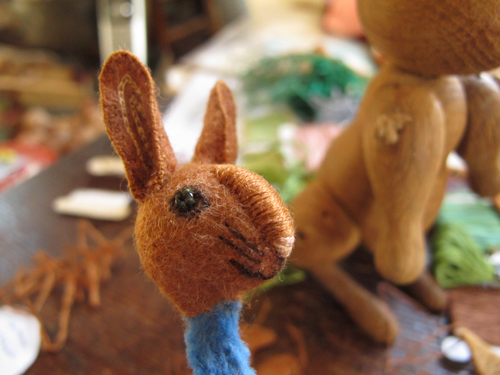 I told my husband Rob that I was making a habitat for rabbits and he immediately said, “Oh, it’s a Rabbitat!”

See all of the Rabbitat posts here.