I recently visited Studio Goodwin Sturges in their new location in Providence, RI. Judy Sue Goodwin-Sturges and I have known each other since I took her illustration classes at RISD in the mid 70’s. We’ve worked together on books since she started her studio in the 90’s. In addition to teaching, she represents a wonderful group of artists, some of whom are former students, and matches them up with publishers. Here she is in her studio office.

The studio moved from Boston to this window lit space in the back of her house. It’s located a few streets from where my mother grew up in Providence.

I saw a felt banner I made years ago displayed with some of the studio’s books. I didn’t know that they were involved with Puff the Magic Dragon and Judy Collins’ Over the Rainbow books. There’s a nice note from Peter Yarrow.

The Studio is a wonderful, supportive agency that has developed hundreds of children’s books.

One box filled room was full of books that Judy Sue moved from Boston. We combed through dozens of boxes until we found my books. She’s trying to down size, so she gave me most of what she had.

One of my early dolls was propped up on the center table at the studio. Her shoes and vest are made of leather.

It’s the same doll that I’m making in the photo below, which was taken by my roommate at RISD in 1976.

I also saw the framed pin display I made for Judy Sue sometime in the 80’s. This way she could see her collection. The custom-made cow may show my first use of  bead udders. 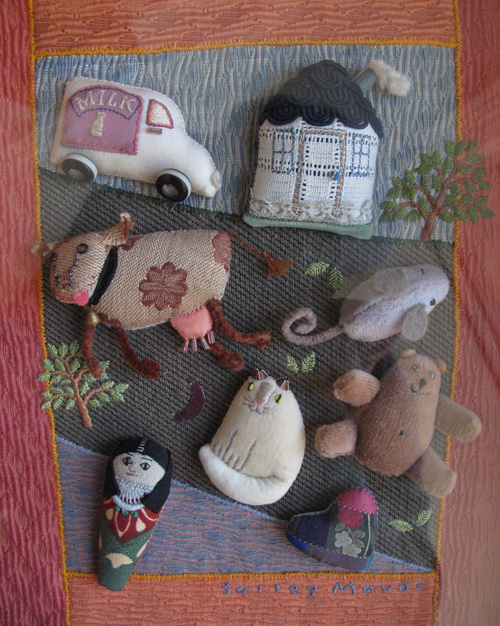 Visiting the new studio, with so many visible memories, makes me appreciate how much support I’ve received from Judy Sue to do what I love to do!  I’ve written about how she encouraged me during my student years at RISD in earlier posts here.   I love this picture of her with some of her former students, including Ashley Wolff and Holly Berry. Thanks Judy-Sue!