Mitten (n.) A covering for the hand, worn to defend it from cold or injury. It differs from a glove in not having a separate sheath for each finger.

Even though Spring is around the corner, we still have cold snowy weather. Here are some mittens that have appeared in some of my pictures, starting with a detail from the tempera painting “Laplander”, which you can see here. Then there’s a boy with red mittens holding a kitten from You and Me:Poems of Friendship. The cozy father and daughter scene is from In the Heart, where red mittens as well as hearts show up throughout the book. The balsam pillow and felt purse projects are from my how-to book, Felt Wee Folk: Enchanting Projects. Last is a boy dressed for winter from Pocketful of Posies: A Treasury of Nursery Rhymes, which will be published in September. 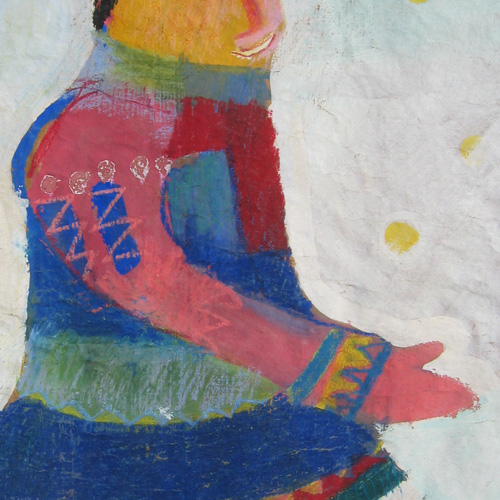 detail from “You and Me: Poems of Friendship” 1997

detail from the balsam pillow in “Felt Wee Folk” 2003

Note: See other posts in the Close-ups series archive here.