UPDATE: The exhibit in question was picked up by 2 venues. Liberty and Justice: The Satirical Art of Salley Mavor was at the New England Quilt Museum (Fall of 2018) and  Cotuit Center for the Arts, (Spring of 2019). A portion of the exhibit is included in The Art of Cute at the Brick Store Museum in Kennebunk, ME (May 1 – Aug. 31, 2019)

What do you do when your art is censored? Do you jump up and down and make a stink or do you take a deep breath and think about what it means? I’ve been doing mostly the latter for the past week, but I’m ready for reasoned action now. My solo exhibit, Liberty and Justice: New Artwork by Salley Mavor, which was to open this weekend at a nonprofit cultural center was cut to the point where there weren’t enough pieces left to warrant a display. So, I was forced to withdraw the remaining pieces from the whole exhibit, 10 days before the opening, after a year of coordinated planning. The organization is not named here because I do not want to discourage people from seeing the other engaging exhibits they will present. And I do not want to cast the staff and volunteers in any sort of a negative light.  They are wonderful to work with and were not involved in the discussions about my show. Also, the issue isn’t just about this one venue. It’s about the culture of fear that is growing, creating an atmosphere where questioning and dissent are silenced.

You may ask, how did this happen? Economic concerns, basically. The members of the venue’s board of trustees were afraid that because this show is controversial and asks the viewer to ponder our current political climate, some donors might be offended and donations could fall off. The overall opinion was that my show should be emptied of political content, with no dolls who are recognizable as Trump or Pence, etc. The idea was to remove the polarizing figures so that everything will be fine and no one will be upset. They didn’t want anything political, so it meant no film and satirical cartoons from the Wee Folk Players. No Trump in a Tudor style outfit as President of the Flat Earth Society and no Pence dancing with a trans person dressed in fishnets and high heels. I think that most board members were unaware that their no tolerance position on any political content would result in the show’s cancellation and create an absence that would have to be explained to the visitors who show up to see my work.

My exhibit was to demonstrate how a contemporary artist uses fiber art techniques to make a statement about today’s world. The new direction of my work leaves behind the cute idyllic and safe fairy world and jumps head on into political territory. The dolls are a metaphor for playing house in a controlled environment, one that has been taken over by outside political forces. For me, the work is about stepping away from a safe, sheltered existence and into a very real reality, one where there is possibility for action toward making a difference in the world. You could call this new direction “sweet resistance art”, since it delivers a strong message in a pretty package, one that is not in your face, even though it does have a tough meaning. My new work has been described as witty, ironic, sophisticated and adorable but chilling. It is a thoughtful critique of the current administration in Washington, with every detail chosen for a reason, and all based on actual things said or done. I don’t expect everyone to agree with my point of view, although many find my artwork refreshing and full of comic relief. To remove the political part would be like taking the stuffing out of the dolls, leaving limp characters of very little consequence and nothing important to say.

My husband Rob and I have talked about this a lot and have declared this show a success! These little dolls are powerful – they’ve conjured feelings and sparked discussion about art’s place in the world. Unfortunately, they are being silenced, but that is also part of the reaction and the reality of our society today.  People are fearful and I understand that, but somehow I am not afraid. Sure, I get nervous every time I put out something political, but I feel like I’m learning about what it means to be an artist through and through. Not for a moment do I think that what I’ve created is not valid or meaningful. People have come to expect a certain kind of expression from me, of sweetness and childhood wonder. They’re surprised to find that I can also make art that is strong, funny and dark. It’s so odd to think that I make cute dolls that instill enough fear in people to get them seriously worried. What a crazy time, in a beautiful world!

So, what am I going to do about the situation? This experience makes it clear that my new political art may be threatening to the powers that be, but it communicates something important about the time we are living in and needs to be seen by a lot more people. Friends are helping find other venues for the exhibit, but until then, I am asking for your help spreading this work around the world. There are several ways of doing this:
Share this blog post.
Share this Facebook photo album or this blog page with scenes from the Wee Folk Players (They’re a Stitch).
Share our animated short film Liberty and Justice: A Cautionary Tale in the Land of the Free, which is now on YouTube here.
Please let people know that this work was pulled due to its content, and comment on your beliefs about censorship in the arts. Let your voice be heard, too!

This is but the latest chapter in the ongoing saga of my artistic journey.  As always, thank you for following along. To see posts with individual Wee Folk Players cartoons, plus commentary please visit this page. 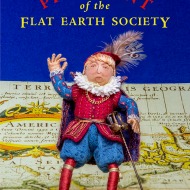 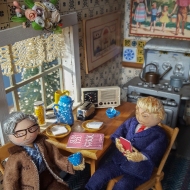 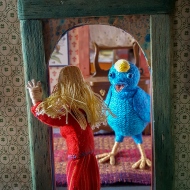 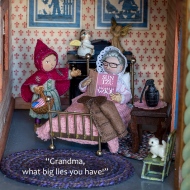 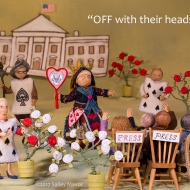 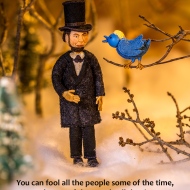