With opening day looming for the Fairy Houses of Beebe Woods exhibit, (Thursday, June 20th at Highfield Hall and Gardens) several of the 23 participating artists have been seen working on their creations around the property. This past weekend, I met up with a few of them. Children’s book creator Amy Wilson Sanger is building “Fire Flye Hollow”, a wondrous shelter of moss, bark, driftwood and orange beach stones around a sapling on a hillside behind Highfield Hall. My house, “Lichen Lookout” is going up in a copper beech tree, so I needed a ladder. 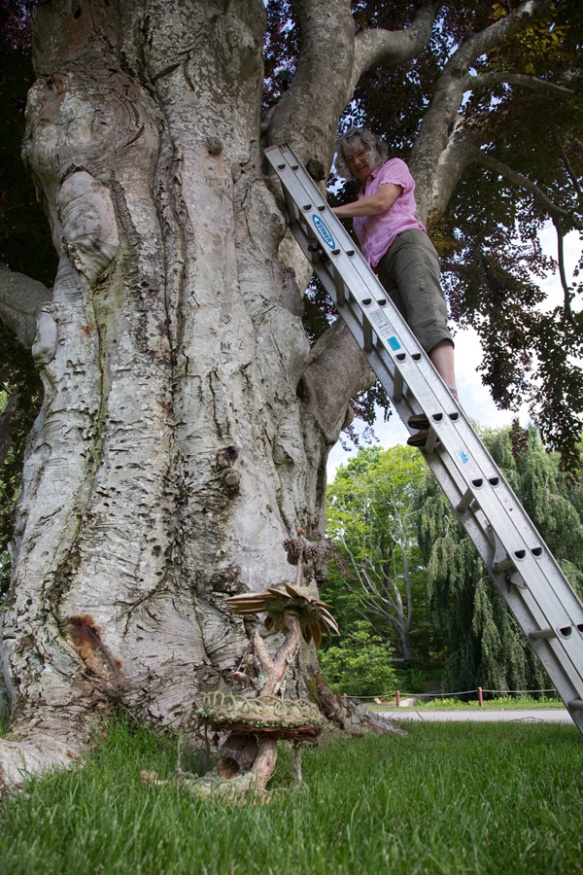 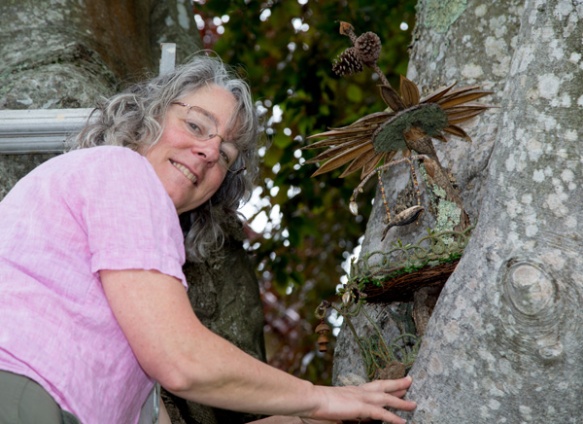 To provide a base for the house, I put some beach stones in a fishing net, making a kind of beanbag chair that could be plopped in a hole in the crook of the tree. I then attached the base to the fishing net with wire, thereby keeping it from toppling out of the tree.

Alfie Glover was there, too, installing his whimsical ladder piece, “Birds and Fairies Collaborate”. He has written a story to go with it about how fairies make ladders which help birds learn to fly.

I arrived just in time to see Glen Carliss returning from a scavenging trip in the woods nearby. His fairy house is situated on a low tree stump in a choice corner spot. Glen and his assistant, Susan Cannavo were busy landscaping around the beautifully constructed “Stonehedge”.

I’ve felt from the beginning that this was going to be a fun show! And now that it’s progressed from an idea into something real, I am seeing that it has grown into a happening, with a wonderful cooperate energy and spirit! I hope that many of you have a chance to see the exhibit, which will be on display from June 20 to July 21. The Artists Reception will be held on Sunday, June 23rd from 1:00 to 3:00 pm at Highfield Hall and Gardens in Falmouth Massachusetts. Being an outdoor show, the houses will be subject to weather conditions and curious humans, so don’t wait too long to see it! 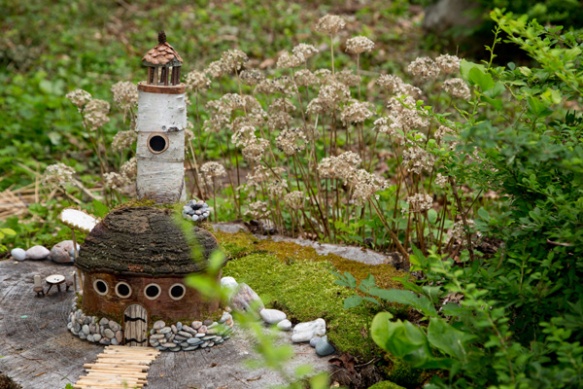