Yesterday, Rob and I went to see my exhibit, Liberty and Justice: The Satirical Art of Salley Mavor at the New England Quilt Museum in Lowell, Massachusetts. When the show was abruptly cancelled at another venue due to its political content, they swooped in to save the day! Since delivering the artwork a few weeks ago, this was the first chance we’ve had to go back and see how it all looks. I can tell you that their curator Pam Weeks (pictured in foreground) did a beautiful job arranging everything in the two galleries. One gallery contains a selection of framed photographs from the Wee Folk Players series, a monitor showing the 14 minute animated film on a loop and a display case full of the real dolls, props and scenery from the film. 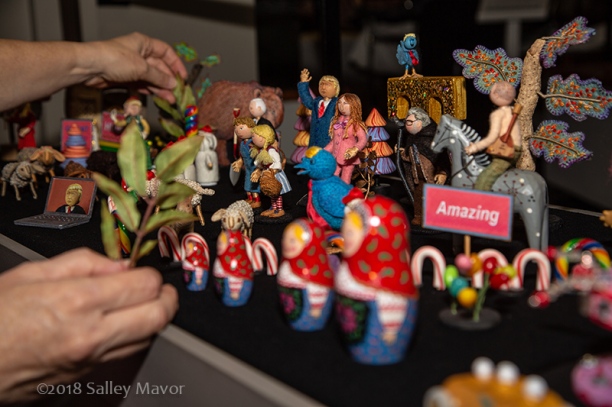 Across the hall is a gallery showing my earlier bas-relief embroideries from what I call “The Innocent Years”, which includes a number of original children’s book illustrations. 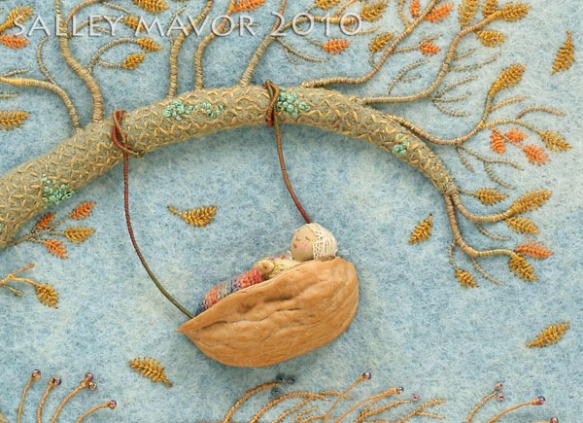 While we were there, we happened to meet members of a Boston area museum club, who came specifically to see my show, which they heard about on the news. You can watch my interview on WGBH TV’s Open Studio program with Jared Bowen here.

The group was enthusiastic about both my political satire and earlier work, which they were not familiar with. One of them remarked that she especially liked the history lesson with authoritarian leaders at the end of the Liberty and Justice movie. I found her comment interesting, since that is the scene that has created the most fuss. I think it helps that the museum has presented my work in context, with signage explaining each part. Museum director, Nora Burchfield  told me that they have received no complaints about the exhibit. On the contrary, several visitors have made extra donations as a gesture of appreciation to the museum for having the bravery to show my new work.

In the photo below, I’ve just pointed out how the nursing mother in “The Red Chair”, until recently, was my most edgy piece.

The exhibit is up until Dec. 30, 2018, so I encourage you to make the trip to Lowell if you can. I know that some of you from far away have mentioned that you plan to go when you’re in the Boston area for work or family visits this fall. Next year, the exhibit will travel to the Cotuit Center for the Arts in Cotuit, Massachusetts, March 2 – April 20, 2019. Artist Talk – “Sweet to Satirical”, Sat., April 13, 2019 at 11:00 AM.

The doll house I used as a set for the Wee Folk Players series is in the hallway between the two galleries. When I made the house 40 years ago, I remember noticing how the project consumed me night and day, which was in contrast to other people my age, who were focused on finding a mate.  Above it hangs my Self Portrait: A Personal History of Fashion.

The exhibit occupies 2 galleries and a hallway in between and includes the following:

Liberty and Justice: The Satirical Art of Salley Mavor

Salley Mavor will talk about her evolution as an artist, from portraying a safe and idyllic existence in children’s books to tackling real world political issues. Using examples of work from the past to the present, she will show her transition from sweet to satirical. This is an opportunity to take a behind the scenes peek at her creative process as she develops dolls, props and scenery for her Wee Folk Players theater troupe and stop-motion animation project, Liberty and Justice: A Cautionary Tale in the Land of the Free. Ms. Mavor will discuss the response to her political work, its effect on her future artistic endeavors and she will address the censorship issues surrounding her exhibit. 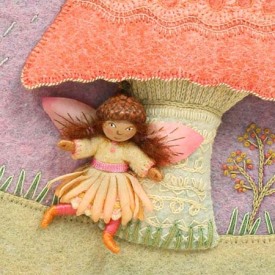 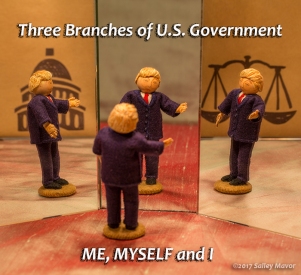