In this new year, I thought it would be a good time to bring you up to date on the stop-motion animation my husband Rob and I have been working on for most of 2017. I introduced the project a while back in this blog post. Yes, we’re still inching ahead, spending every spare hour filming in the basement. We’ve recorded 8 minutes of a 10 to 12 minute video and hope to have the filming part finished later this winter. Then, there’s the soundtrack, which is especially important for a wordless story like ours. For that, we’re commissioning an original score and sound effects from musicians and sound artists.

The movie, Liberty and Justice, a political take-off of Hansel and Gretel, is a cautionary tale about what happens when a pair of lost citizens wander in search of a leader. So, when will it be finished? Honestly, we don’t know, but we’re estimating that it’ll be ready to show sometime in the summer of 2018. Don’t worry, I will announce any particulars about where it can be seen, once it’s completed.

To give an idea of our process, here’s a video made up of several filming sessions from last summer. Rob set up a separate camera to take time-lapse photos while we worked in the basement. It looks funny to see our actions sped up into hyper mode, when in reality our movements are painstakingly slow and deliberate. I’m animating figures, using wire rigs anchored to black blocks, which are visible to you behind the set. The monitor near where I’m sitting shows the camera view, so I can check how the scene looks on screen. You can barely see Rob with his magnifying headset behind the camera slider, as he turns on a flash light to see the measurement for each photo.

Keeping in mind that this post could be a spoiler, I’ve selected a group of still photos that don’t give away too much of the good parts. You will surely pick up on some of the themes, though. Most images show our animation stage during the last month or so. At this point in their journey, the characters (who’ve just been through a lot of challenges) enter a kind of candy land. 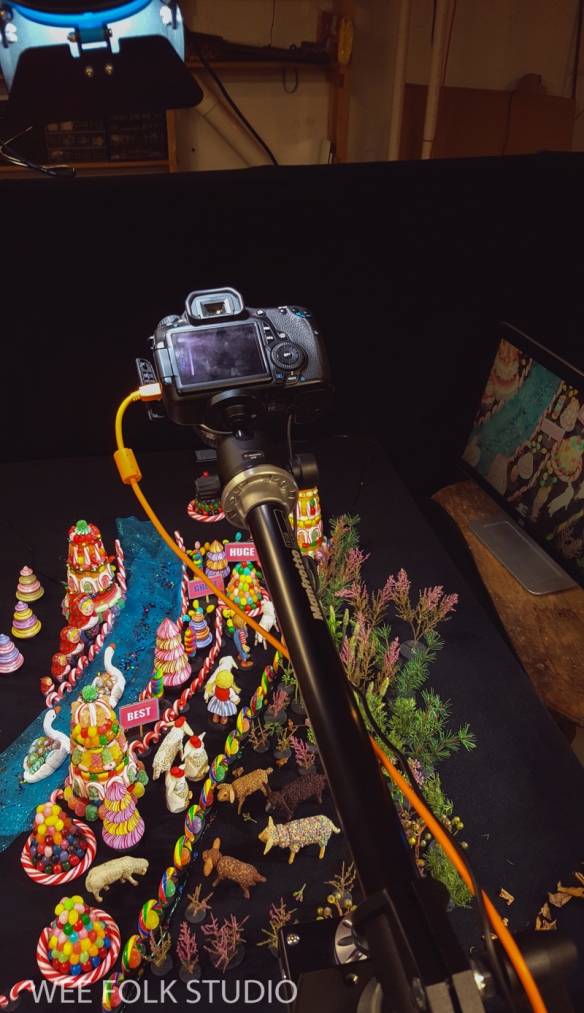 It was so much fun setting up the scenes, which had to be adjusted according to the camera angle and movements of each shot. How do you make water for animation stage? Shiny blue fabric, jumbo glitter and mini LED lights, of course. It looks so cool when the swans move along! 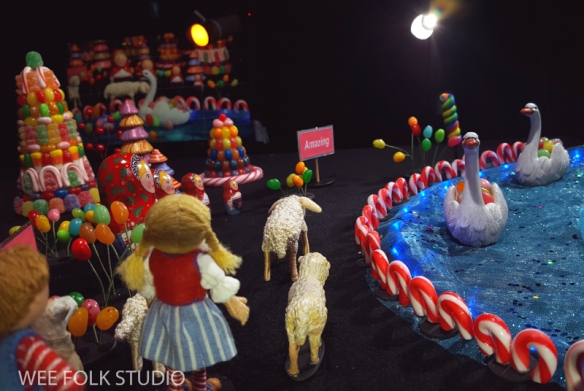 When starting the filming process all those months ago, we knew that stop-motion animation takes a long time. And we’ve since learned that it requires many forms of patience. Not only do we need the capacity to deal with all the fussy parts pertaining to animation, we have to be patient with each other. This is the first large joint artistic/technical venture we’ve undertaken in almost 40 years together. Even though we’re used to working solo most of the time, working side by side has been an overall positive experience. We’re both meticulous workers and neither of us has a problem  concentrating for long stretches of time. It’s not unusual to spend a 5 hr. stretch filming a 12 second scene. At 24 frames per sec., that’s 288 photographs, each taken separately, with camera motion and moving up to a dozen figures and props in between shots. Crazy? Yes, but it’s all worth it when you play back the movie and see the characters come to life!

I got carried away making props – searching for jelly beans, gum drops and small scale sugary treats to decorate with. As a rule, I don’t use hot glue because it’s messy and stringy, but in this case it was an effective solution. I like how actual candy with sparkling sugar crystals adds a realness to the fantasy world.

I lopped off the stems of mini sugar canes with a knife, saving the curved ends to build a border wall. Handling all of this sticky candy was so unappetizing that it felt toxic, like working in a sugar Super Fund site.

So far, no little critters have come out at night to nibble the edible set. This little campaign motorcade zooms along in the movie. I’m looking forward to hearing the sound effects! 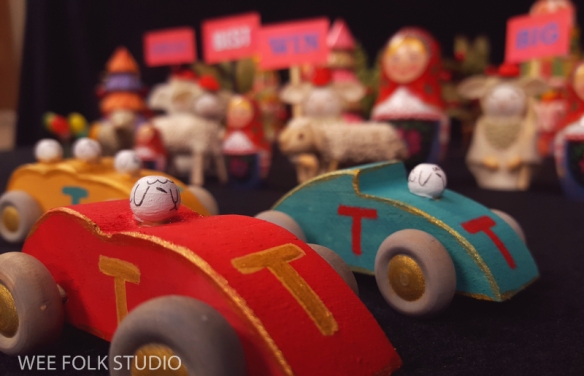 It was a relief to get back to needle and thread for this sheep character. 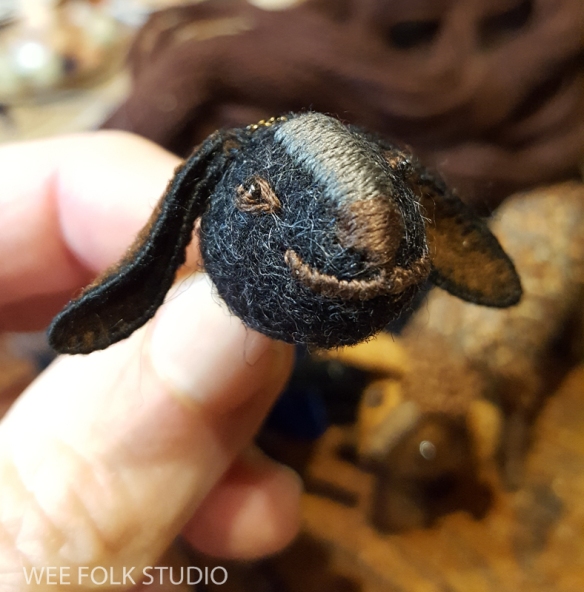 He joined the brown and rainbow sheep for a cameo scene. I manipulated their heads, ears and tails during the filming process.

While doing the animation, I refer to a monitor (top, center) that projects the camera view. It’s tricky to move the bodies in small enough increments to make their movement look natural.

I would like to take this opportunity to thank all of you who take an interest in my work and read this blog, whether you’ve followed for years or just subscribed. Your support means a lot to me and it is an honor to connect with you and the world outside of my studio! 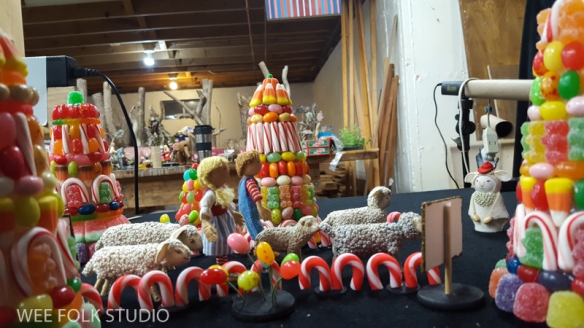 28 thoughts on ““Liberty and Justice” in process”