I had an inkling that yesterday’s Open Studio would be well attended, so I set out to expose as much floor space as possible. Clearing boxes off the floor was the biggest chore. The many piles of stuff that have been accumulating over the past few years were in the way.  (It’s been awhile since I’ve invited in the public) Driftwood, mailing tubes and boxes of “interesting” fabric were hauled off and temporarily absorbed into the main house.  In the above photo, you can see boxes stored under the table. On Sunday afternoon, there was a steady stream of people climbing up the stairs to my studio. There were lots of locals, along with several people who drove down to the Cape from the Boston area. I was glad to see Cathy,  who  was unable to attend my workshop last month, due to illness. When she read about the open studio in this blog, she convinced her husband Dave to bring her down from Wayland yesterday!

Many friends showed up, including Betty and Jay, which was a treat. The Pocketful of Posies tree is in the background.  Terry, who has helped me with sooo many projects (cake decorating, costumes, and community quilts, to name a few), handled sales of posters, books and cards (same items are in my Etsy shop). Thanks, Terry! I wish I had more pictures to show, but I was so busy talking to people that the camera sat unused through most of the afternoon. It was lovely to see so many folks! It takes an event like this to make me clean up. Now, I’m trying to figure out how to reabsorb the stuff I cleared out of the studio, without ruining the much improved Feng shui. 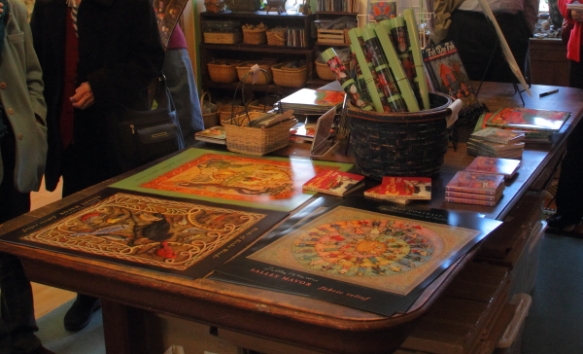